Design It. Build It. Remodel It.

DFW Improved provided an outstanding level of service in their transparency and reliability. With a labor shortage and supply chain problems plus the recovery from the February ice storm we had a lot of concerns about the practicality and price of a kitchen remodel. Starting with Jaime and the evaluation process we felt informed and well guided. Tiffany was an angel of patience while we picked out design selections. Her expertise and honesty about sticking to price helped us feel confident going into the project. John had the near impossible job of coordinating resources for weeks to keep us as on-schedule as possible. He made extra effort to communicate quickly and honestly. The project outcome exceeded all expectations and we’ve recommend DFW Improved to several people already.

John and Casey were great to work with. They were attentive to any issues or questions we brought up and worked quickly to a solution that was satisfying. Excellent communication on schedule and scope of project. Would readily work with them for future projects.

We had a great experience with DFW Improved. All contractors were professional, speedy, and completed work with expert craftsmanship.

I contacted DFW Improved after my house was flooded in February 2021. I had them do the damage repair as well as updated my kitchen. My first contact was with Jaime. Jaime is an easy-going, affable, intelligent person who is very good at his job. He showed up at a difficult time for me and he was reassuring in the quality of work that would be supplied as well as being realistic with me regarding the time frame of said work. He was easy to work with after the contract was signed and the process started. Change orders were easy and fair, Jaime did not nickel and dime me! The reconstruction meeting took place at the time Jaime stated it would and the process started two weeks later as they stated it would. A week after the meeting I had a schedule in my hand for the 6 weeks of work that was to be done. My project manager was Blake, he’s a smart, take charge individual that was on top of the job on a daily basis. He always kept me informed of the daily activities. Blake said something to me during this process that really resonated with me, “James, we want to make you happy”. I thought wow, I’ve never had a contractor actually say this to me but also back it up in actions. Blake and DFW Improved went above and beyond for me and made it as easy as possible during this difficult time in our lives. I would not hesitate to use them again.

Every person who came in do work on my projects were attentive to details. They kept my home as clean as possible with each set of workers cleaning their areas when finished for the day. Shane, the project manager kept me informed of all scheduling, any changes needed, and making sure each piece we were happy with the work. Our experience was fantastic!!! My husband is very detail oriented and he was extremely impressed and happy. Everyone who came to our house was professional, friendly, and working hard on their projects. Thank you!!!!!!!

Second project completed with DFW improve. Amazing service from design through execution. Couldn’t be happier and would highly recommend them.

We recently did an important project with DFW Improved—the main wall in our living room. It is the most visible wall in our home. They transformed it into a wall of custom cabinets and shelves centered around our family portrait. I absolutely love it! We also did a small remodel in one of our bathrooms and added French doors on another room to turn it into a bedroom. They were very reasonable and were able to do the projects at the same time to save us money on each aspect (tile, painters, etc). We will definitely use this company again and will request Todd James as our project manager. He was efficient, communicated with us daily, and very pleasant to work with!

Our entire experience from Start to finish was top notch! Todd and Gaby’s genuine care for my family and my home was unexpected and so appreciated throughout the entire process. Highly recommend for anyone considering a remodel project- they take the headache out of what normally is a stressful time. Thank you DFW, thank you for having 2 kickass employees on your team, who go over and beyond to ensure that customers are satisfied and cared for. Thank you DFW for having 2 employees who love their jobs so much it shows in everything and every interaction. Thank you Gaby and Todd.... for my badass kitchen. We truly can’t thank you enough. Augie and BJ

We had a great experience with DFW improved. Their project manager Todd was the best. He gave us a schedule of when things would be done and he kept things moving on that schedule and was even ahead of schedule. In the end we love our kitchen and we are very pleased with the job they did.

We had a fantastic experience with D/FW Improved from the beginning of our remodel straight through the completion. Shane Harvey, our project manager, was on top of every aspect of our remodel. His communication with us was top notch. We will definitely use D/FW Improved on future projects.

Shane Harvey is everything one wants in a Project Manager : Personable, clear proactive communication, timely, helpful, mannerly and courtesy ! I was impressed with his teamwork skills and the way he treated and worked with his fellow tradesmen ! Encouraging in this day and age 🙏 Beautiful work ! Please post this in all social media that helps your business and your people! jrc

Total remodel of existing home!! From the first contact to discuss project, design and completion of this major project was excellent. Great communication and flexibility to accommodation some changes I made during the renovation. Project manager and sales consultant provided great suggestions to improve overall plan. Practical ideas that I really appreciate in my new home !!

Carlos did a great job for us and was very personable

Overall great experience and will use you all again for next remodel for sure. Sheetrock repairs were disappointing and had to be redone a couple times to get right on our walls and that was the only frustration. Quality work in all other areas overall and beautiful remodel. Working with Carlos and Kenneth was a great experience and highly recommend them/DFW Improved.

We had a great experience working with Shane. He is on time , responsive and honest about timings, delays etc. From the start of project, he set realistic expectations and was attentive to our concerns. As soon as the project started and it was a huge project, he aligned all trades and the work finished earlier than expected. We were supposed to move back April 2020 and with COVID shutdown, we requested to finish project ASAP. We are great ful that he made it happen and we were able to move back into our home by March end. A few things had to be taken care of afterwards but we were confident that Shane will respect our timeline and he delivered.

After the winter storm from last year. Mr. and Mrs. Pool called DFW Improved for the water damage. In the end the finish of their home was absolutely beautiful. Mr. and Mrs Pool we’re a joy to work with!

Finishing up a minor kitchen update. New paint, countertops and backsplash can really update the look of your kitchen 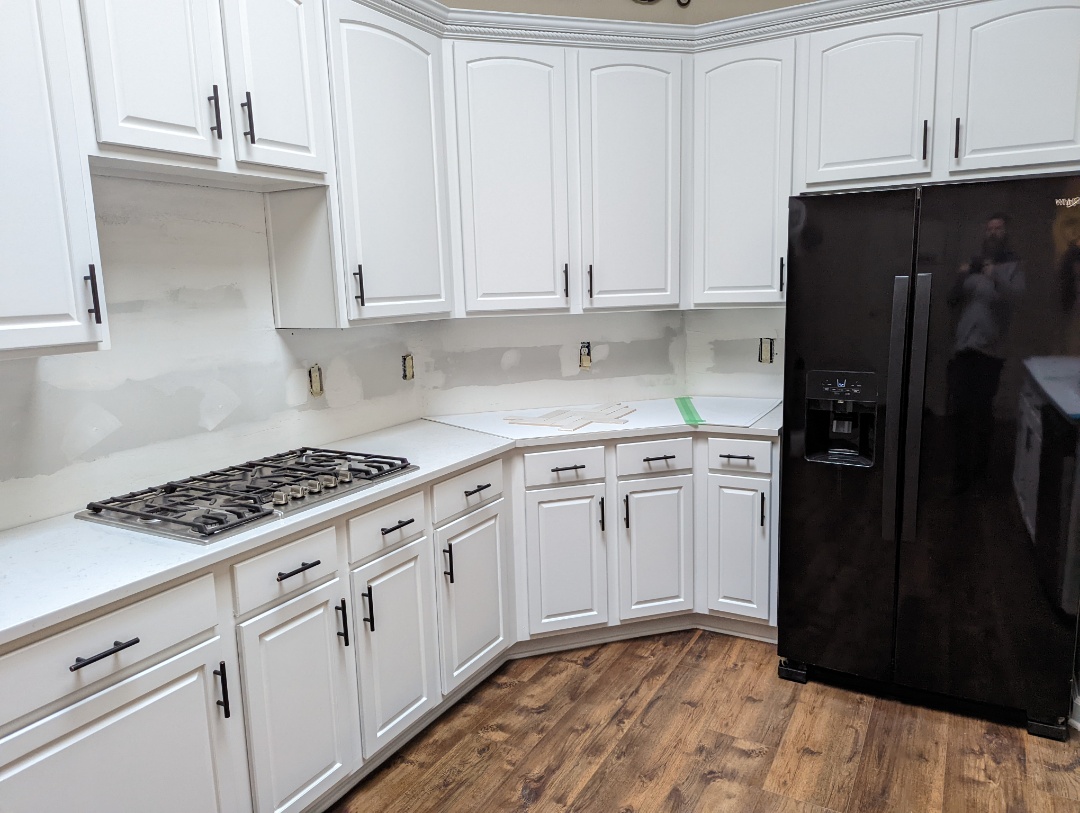 Mr. and Mrs. Eitchen called us to remodel their kitchen. We had two new islands relocated the kitchen sink in all the plumbing along with the dishwasher installed new countertops and repainted the kitchen cabinets in the walls. Mr. and Mrs. Eichten were awesome to work with! I look forward to working with them again in the future!

Mr. and Mrs. Eichten called us to remodel their kitchen. We added 2 islands, relocated the plumbing, new countertops and painted the walls and cabinets. Mr. and Mrs Eichten we’re super awesome and great to work with! I look forward to working with them again in the future!

We install new tile flooring in the kitchen and laundry room. Tore out the old shower in the master bathroom along with the floor. We installed a new tile floor and updated the shower wall tile and shower glass. Everything turned out absolutely beautiful! Lisa and Tanner were a great couple to work with throughout the project!