Rated 4.8 out of 5 stars based on 4 customer reviews

Adam was quick to diagnose the issue and repair it same day.

There is no telling with what happened upon development upon 25+ years ago. Thank you Chris.

After arriving to the home the homeowner expressed that she has had a blockage on the second floor for sometime now affecting both bathrooms, but everything downstairs seem to be functioning fine, after verifying that the blockage is isolated to the second floor and then proceeded to enter the crawlspace for the entire townhome building to see if thereâ€™s a clear access point for clearing the drain from the bottom, with there being no access from underneath as well as the roof being too high to clear the drain from the vent stack I provided upfront pricing for removing the toilet and running an auger down the drain from there at that point the homeowner may be aware that she would prefer the line be cleared from the vent, the homeowner is going to seek a second opinion before moving forward with work

After arriving to the home the homeowner made me aware that the house is under extensive renovation including the kitchen and both upstairs bathrooms, after reviewing the newly installed kitchen sink, and the fixtures supplied for the kitchen as well as both bathrooms and supplied fixtures there are numerous corrections that will need to be made before installing fixtures and tying and drains may begin, the homeowner is going to reach out to their contractor before moving forward with getting upfront pricing on hooking up the plumbing in these three areas

After arriving to the home the homeowner expressed that he does not have any hot water since this morning and is unsure of the cause, after assessment of the heater and verifying that itâ€™s leaking from the tank and will need to be replaced I proceeded to check the water pressure which measured 60 psi as well as offer four upfront prices for replacement of the unit, the homeowner needs to speak with his spouse before making a decision and will call back when ready to move forward with work

outside hose faucet replacment install frost free x2 Upon arrival customer made me aware that he was looking to replace front and back hose bibs I gave the customer multiple options and upfront pricing he chose to proceed replacing both hose bibs I was able to perform the task, how to mortar the hole to be able to attach to foundation due to older mortar letting loose And advise the customer to hold off for roughly 12 to 24 hours before use so mortar can dry,I was able to test both hose bibs and both are functioning properly Nick pleasants Raleigh,nc

Reseal and tighten extremely lose tub over flow in master bathroom, if customer chooses to go with option 1 and problem arises again we will have to go with option 2 but after testing believes that the over flow was so loose is why this issue was happening

Lavatory pop-up drain was leaking that was installed approximately month and a half ago, The drain was resealed with plumbers putty and pipe dope and the pop-up was reinstalled as well and tested and everything is functioning perfectly at this time

Adjusted previously installed pressure reducing valve to approximately 65 psi to accommodate the homeowners needs when using the shower as well as other fixtures in the home, no charge as a courtesy to the homeowner

Clean multiple aerators and showerheads to improve flow due to the sediment buildup from water heater not being serviced. Aerators cleaned were kitchen sink, bar sink, five Lavsinks, two showerheads.This work return pressure to those fixtures but until water heaters are replaced problem will persist Nick pleasants Raleigh,nc

Replace delta monitor shower cartridge in master bathroom shower Upon arrival customer made me aware that the master bathroom shower was continuously dripping this is a balance ball delta monitor shower cartridge. I gave the customer multiple options and upfront pricing and at this time he chose to replace the cartridge, work was completed and tested thoroughly and now functioning properly While on site I check the pressure to the home and found it to be 70 psi as well as locating the water heater which is new also found his main shut off to be in working order Nick pleasants Raleigh,nc 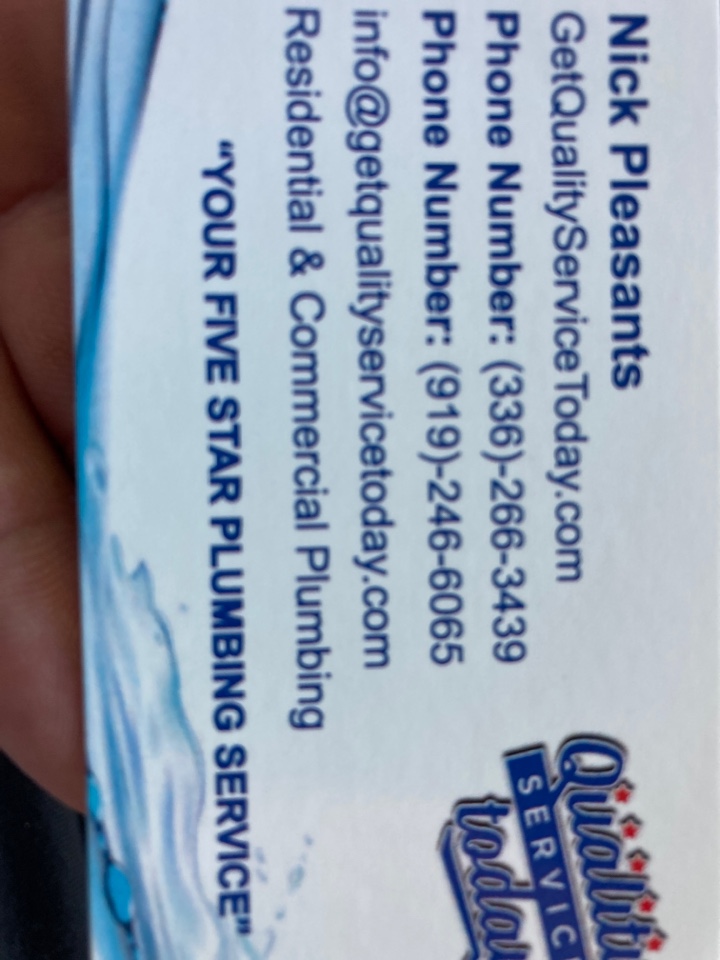 Replace toilet with value model Kohler highline and replace angle stop Upon arrival customer made me aware that the upstairs hall toilet was leaking into the bowl and was unstable as well as the shut off valve leaking I gave the customer multiple options and upfront pricing she chose to go with the value Kohler highline round front toilet and replace toilet angle stop Water pressure to home is 55 psi main water shut off to the home is functional, water heater is also functioning properly Nick pleasants Raleigh,nc